Introducing Apache Red natural honing stone. It is said to be the perfect pre-finishing compliment to Apache Strata. 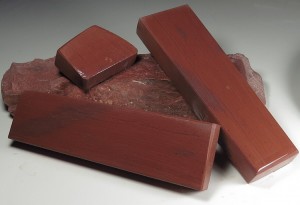 It’s a perfect pre-finisher and a solid finisher. The grit is estimated to be in the 5k-8k range (updated Dec. 2014 after more analysis and feedback).

The Apache Red is in a class of its own. It is loaded with red iron (likely attributable to hematite, a mineral form of iron oxide), lending to the incredibly beautiful hues. Found in the same mountainous area and only a few miles from the Apache Strata quarry location. The Apache Red comes in at about 400 million years old based on stratification data. It seems that I was meant to discover it as an obvious compliment to the proven Apache Strata stone.

The Apache Red seems to be comprised of extremely fine iron-laden quartz and volcanic ash granules–this is a guess since it hasn’t been professionally analyzed. The stone is found in the the visual proximity of a known extinct volcano, which lends credence to the possibility that the lighter impurities in the stone is volcanic ash. The stone is bound together tightly, adding strength and continuity. At first glance, it seems like the raw Apache Red stone is a type of sandstone, but it is much finer and smoother, especially after cutting into hones. It seems to be a siltstone with a unique blend of iron, quartz, possible volcanic ash and other unknown goodies.

Apache Red does a wonderful job of smoothing out any gouges on your bevel. I started out with some light/medium thickness slurry (created with a slurry stone of Apache Red) and using notable pressure on the razor against the stone. After a few minutes of honing, and switching to water only, I was able to get an HHT3/HHT4 using only the weight of the razor. I stropped on linen/leather and got an HHT4/HHT5. I am not experienced at honing like many who visit this site and I still achieved these remarkable results. That says a lot.

Like with all hones, the end result is primarily based on the skill level and touch of the user.

You can feel the resistance of the Apache Red throughout the entire process. I tested the stone a couple of hours and noticed that there was a glazing beginning to form over time on the honing surface–not a bad glazing, but seemingly beneficial. I expected the stone to be more “slippery” since the glazing was beginning to take place, but on the contrary… the gratifying resistance was steady and prominent. I think it could be the volcanic ash factor, though I am not sure.

The stone has a definite attitude, which it maintains. If you like a stone to grip back at you when you hone, the Apache Red is for you. I don’t foresee the stone ever losing its grip no matter how glassy-appearing the surface gets. Very consistent feedback and it’s good!

Apache Red is very hard. When shaping the stone with a hammer prior to cutting, I have to strike the raw stone many times for it to break. It is very strong. Unlike the Apache Strata, which breaks and chips readily from a hammer strike (because it is brittle like flint/chert), the Apache Red has a strong bond that resists fracturing. Mohs hardness scale is about a 4 (just a guess).

You can always get a nice slurry with a DMT of about 400-800 grit. The slurry is powerful–it makes noticeable swarf in no time at all. The slurry does have marked cutting power. I was including a slurry stone with the first few stones, but stopped offering because I cannot guarantee the quality of the slurry stone. When I can narrow down the slurry stone’s quality better, I will offer them again. Sorry to disappoint.

It seems to be porous and does soak up a little water. When wet and then wiped dry, you will notice the stone is still dark from the water… after a couple of minutes of drying, it begins to look ashy; there is definite porosity. I would NOT recommend soaking, but that is up to you. I have not tried it myself nor do I endorse the practice.

With water alone, it isn’t fast (from my short experience with the stone), but consistent and a pleasure to use. With slurry,  it has true cutting power and is noticeably faster. Everyone’s honing techniques are so broad, it is really hard to say what you will experience until you get down to business.

The Apache Red will put a smile on your face as a powerful pre-finisher. Use this stone before using reaching for your finishing stone (preferably an Apache Strata hone *wink wink*). This stone will replace your 5K-8K stone easily. The Apache Red paired with the Apache Strata as the finisher will deliver consistent, smooth and extremely satisfying shaves.

There is no doubt the Apache Red can be a finisher, but your would have to work your way to achieving this–meaning, it will not just get there without practicing and experimenting on the stone. It has a definite role as a pre-finisher. It’s hard enough and effective enough to make you a believer. It would be a personal choice and you will know where the Apache Red fits into your honing regimen. No guarantees it will perform for you because I have discovered that it takes a very disciplined hand to make this sing. The iron oxide that gives the stone it’s red color is not so forgiving. You can probably over-hone with it if you press too hard or use too many strokes. It takes finesse.